Marianne Janik, CEO of Microsoft Switzerland, is committed to a culture of continual training. Being bold, having the confidence todo things and seeing learning as a means of personal enrichment not only apply to the tech company’s employees but also to its partners and customers.

We’re given a warm welcome, but we’re living in the times of the corona­virus so there are no handshakes. Instead, Marianne Janik greets us with a namaste by pressing her palms together. At the Microsoft Switzerland offices in Walli­sellen near Zurich, where strict hygiene rules still apply, we are welcomed by Marianne Janik. The topics we’re going to cover are life-long learning, digital upskilling and the future world of work.

In a world that is growing closer together yet changing rapidly at the same time, networked thinking, creativity and a sense of judgement are becoming more and more important, we’re told by the 55-year-old CEO, who has been managing the Swiss national subsidiary of the American corporation since 2015. Technology and automation play a special part in this: “We’re increasingly surrounded by sensors. We’re seeing an exponential increase in data volumes and computing power.” This duality between humans and machines is having just as much of an impact on society as it is on corporate culture and leadership principles, says Marianne Janik.

The qualified lawyer sees it as her re­sponsibility to make sure that the managers and teams are given the right programmes and tools to make learning accessible and attractive. This offering also needs to be rolled out to the customers and approximately 4,600 partner companies. And the self-responsibility of each and every individual to continue learning needs to be reinforced within this network.

“As is the case in all other companies, the purpose and scope of our learning offering is questioned now and again,” says Janik. “But the approach towards digital up­skilling among the 620-strong work­force at Microsoft in Switzerland is a positive change. Many employees see this as an opportunity and are proud of their learning success. This is also apparent from the posts on social media. “I’m pleased with what our employees say on social media,” comments the company’s CEO.

“We have to understand and master increasingly complex technology. And the areas of artificial intelligence and quantum computers require very specific knowledge.”

But nobody should feel under pressure to perform. Those who don’t succeed in obtaining a certificate the first time can try again. Not everyone learns at the same speed, nor do they have the same level of receptiveness. And there’s a lot to learn – the skills that will be required in the future are challenging. “We have to understand and master increasingly complex technology. And the areas of artificial intelligence and quantum computers require very specific knowledge,” continues Marianne Janik.

Marianne Janik (55) has been CEO of Microsoft Switzerland since 2015. Before this, she was a member of the Executive Board of Microsoft Germany and was responsible for the public sector, education and healthcare sectors. Born in France, she’s a qualified lawyer. She began her career at Daimler Benz and EADS. Marianne Janik is extremely committed to the digital transformation in Switzerland, in particular in the areas of innovation, security, education and training. She’s a member of the Executive Committee at digitalswitzerland and the boards of the associations ICT Switzerland and ASUT. Marianne Janik is married and has two children.

The emotional aspect of work is important

Skills like the self-organisation of teams and project management are becoming more and more important. This is based on a leadership culture where learning is encouraged. “This is something we’ll con- tinue to invest in,” the CEO promises. It’s time-consuming, but being able to mobilise the potential within the company pays off. This includes giving employees the necessary freedom to encourage creativity and networked thinking.

It also means getting leaders to do more “emotional labour”. Marianne Janik believes that Microsoft Switzerland is halfway along this journey. “We definitely still have some way to go,” she tells us. It’s a continual process. And she doesn’t know what tomorrow’s world will be like. But the US corporation’s products keep pace with technological change: “Learning makes us fit for the future.”

Group experience during the learning weeks

Within the company, it’s important to create transparency and to allocate the necessary amount of time towards learning. This is why we introduced “learning weeks”. Creating a group experience has proven to be successful, even if each participant is learning in front of a screen. The group participants all support each other, so any differences in level even themselves out.

Cloud services are a focal point of the learning content, reports Janik. There are tests and certificates for these courses. Other important topics include project management and coaching, which are both worthwhile – even for people who aren’t in a management role. Microsoft Switzerland distinguishes between mandatory training that everyone has to complete and personalised training offers.

First and foremost, digital upskilling involves empowering people to have greater confidence to do things. The CEO wants employees to see learning as a means of personal enrichment and for them to feel ready to take on the tasks of the future. Commitment to training is vital at all companies. And it’s up to the leaders to create a suitable learning culture. In Janik’s experience, CEOs are often too far removed from this topic. “They need to do more than they’re doing today and shouldn’t be afraid digging down into the details. It’s about learning, learning and learning.”

At her company, people also respond differently to the training offering, which comes as no wonder as Microsoft Switzerland employs people from 40 countries. “As is the case across the entire company, we have cultural and regional differences here too,” says the multilingual cosmopolitan. Finding highly-qualified people is a challenge for Microsoft, as there’s a global contest for recruiting the best talent. “Switzerland has a lot to offer,” says Janik, referring to the education system. It’s important that talents from other countries are able to remain here, especially foreign students once they’ve completed their studies.

Physical presence in the office will become less important overall. Janik comments on how people are more relaxed about using technology nowadays. Today, hardly anyone has reservations about turning on the camera of their laptop in their own home. And thanks to the cloud, people can access all their data from around the world. This goes hand in hand with an increase in self-responsibility too. She sees it as a positive sign that there was nothing to suggest employees would abuse the freedoms granted to them.

Microsoft has been active in Switzerland since 1989. The national subsidiary of the software corporation from Redmond in California, which also owns LinkedIn and Github, has around 620 employees distributed across the locations in Wallisellen, Bern, Basel and Geneva.

The future is within reach

One of the consequences of this new world of work is that less office space will be needed in future. But personal contact will still be invaluable, says Janik. Next year, Microsoft Switzerland will relocate to “The Circle”, a huge business complex at Zurich airport. The company is in the process of setting up the offices. They’re initially being designed for the next ten years; the spaces will be used more flexibly and there will be more frequent conversions than in the past.

«As is the case across theentire company, we have cultural and regional differences at Microsoft Switzerland too.»

Marianne Janik doesn’t dare provide a glimpse into what the next decade will be like: “That would be pure speculation,” she tells us. But one thing is certain: people will still be people. And the range of skills required is increasing along with diversity – across generations too. “There will be more people who can and want to carry on being productive, even in their seventies.” The needs of the individual and dealing with emotions will also become more important.

«We’ll learn how to deal with the robotics and artificial intelligence that will be ever-present in our day-to-day lives,” she believes. What we need to do is design the interaction between humans and machines in such a way that the benefits are still obvious. At work, there’ll be new forms of collaboration, video conferences, the use of avatars and new haptic experiences. “Software will help us to overcome language barriers. All of these things will soon be within our reach.»

Marianne Janik – In the spotlight

What were you doing 20 years ago?
Life was just as exciting back then as it is now. At the time, we were entering a new digitaera. Lots of money was being pooled together for crazy ideas and some bold decisions were made.

20 years ago, could you have imagined that you’d be a CEO today?
Not really. But even back then, I was on the look-out for professional challenges. Sometimes, my job today seems like a dream.

What do you want to see in thefuture world of work?
Technology is and will continue to be an important driver for change within the economy and society. I’m immensely inspired and motivated by being able to contribute towards the technological evolution in general, together with our partners and customers. I hope that I can pass this inspiration onto others, so they feel the same way about it as I do.

What is it about your work that fulfils you?
I’m delighted when I succeed in finding the right approach for my employees, the company and myself.

What do you value in particularabout your employer?
The fact that I’m given a great deal of freedom, which is something that you don’t necessarily expect from a major US corporation. I can also largely define my role myself.

How do you maintain a work-life balance?
Over the years, I’ve learned how to effectively combine family and free time with work.

What are you doing in terms of your own personal digital upskilling?
I put aside at least half a day every week and read a lot. I’m continually searching for new publications on future topics.

Your personal career tip for employees?
Keep your eyes open for opportunities and offers. And choose carefully who you want to work for.

Nicolas Bürer on the importance of life-long learning

Sarah Steiner is committed to combining family and career 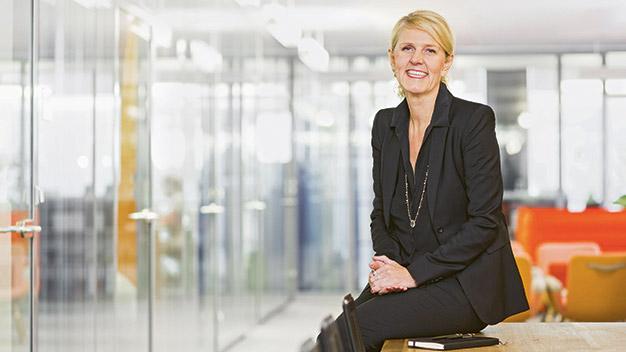 Sign up now – don’t miss out on any future issues